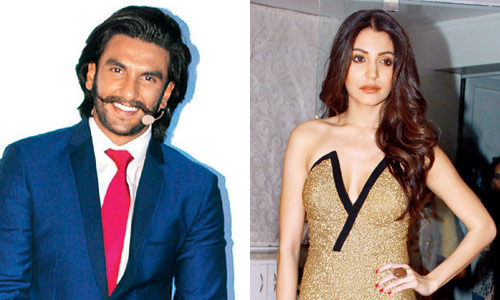 First there were rumours about their alleged romance. And then came buzz about their bitter parting. But the apparent love-hate relationship between Anushka Sharma and Ranveer Singh has always been the fodder for unending gossip around town. However, if sources are to be believed, the two are now apparently no longer aiming at each other’s throat.

What’s further interesting is that their alleged patch-up was brought about by Arjun Kapoor, who is widely believed to be dating Anushka. And all this happened at a special screening organised by Karan Johar for Ranbir Kapoor and former flame Deepika Padukone’s latest film. There was also buzz earlier that Dippy was apparently seeing Ranveer secretly.

A source says, “A lot of common friends of Karan and his team were also present, including Arjun, Ranveer and Anushka. It was Arjun who took the initiative to break the ice between the two. After some awkward silence from both the sides, a few pleasantries were exchanged and they warmed up to each other again.”

While stating that she never shared any acrimony with her first co-star, Anushka tells us, “I share a great relationship with all my co-stars and colleagues. Be it Ranveer, Arjun, Deepika, Imran, Katrina, Shahid or Shah Rukh. At the screening, I greeted all my friends, enjoyed the film and congratulated all the concerned parties as always. I have been very busy and want to focus on my work.”